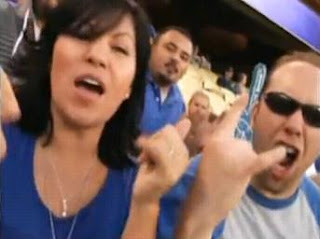 Back on August 3, I was part of a commercial shoot at Dodger Stadium. I won a Twitter Tuesday contest held by @dodgertownusa, and the prize was to be part of the shoot.

While shooting, we used different promotional items, so it was pretty obvious it would be for different commercials. On August 20, I posted the second commercial I was in. Since then, I've been in two others. This is the fourth and final commercial I saw myself in. It was for Fan Appreciation Weekend at Dodger Stadium. The same shot of me and my wife were used in the last three commercials.
I saw this commercial so many times during the last week of Dodger baseball. It was pretty exciting seeing myself on tv.