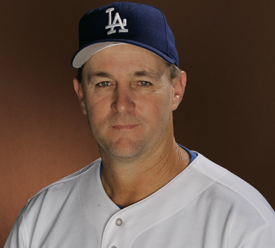 According to Dylan Hernandez of  the Los Angeles Times, Tim Wallach has signed a contract to be on the Dodgers coaching staff in 2011. Although Ken Gurnick at MLB.com is reporting that he was only verbally promised a role on the Dodgers' coaching staff, and will join the team if he doesn't land a Major League managing job.

Wallach's role on the staff has not been determined, but he's likely to be third base coach or batting coach. Wallach was the Dodgers batting coach in 2004 and 2005, and became the Albuquerque Isotopes manager in 2009.

OK, so they don't hire Wallach to manage the team, but they give him a job coaching. Fine. I, like a lot of Dodger fans, wanted Wallach to be the next manager. He has the managerial experience and would have been the right hire for the position. I guess this is the next best thing.

This seems like a consolation prize for the man who deserved to win the gig. And it feels like an insurance move for the Dodgers. If Don Mattingly fails, at least they have the right guy sitting on the bench to take his place.
Share |
Posted by Dodgerbobble at 7:02 AM