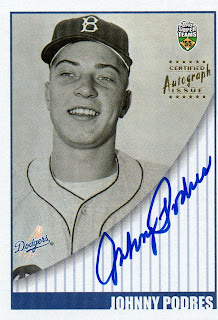 Here's another autograph card from the PC. This is a 2002 Topps Super Teams '55 Johnny Podres Brooklyn Dodgers autograph.

This card is really classy looking. I love the blue sharpie signature on the black & white card. That, plus the blue bordering really gives it an old school Dodger feel.

In 1955, the Dodgers won their first and only World Series in Brooklyn. For the first time in World Series history, an MVP was selected. Johnny Podres, who won games 3 and 7, was that first WS MVP. He went 2–0, with two complete games and an ERA of 1.00. He pitched a shutout in game 7. He was honored as the Sportsman of the Year in 1955 by Sports Illustrated magazine. 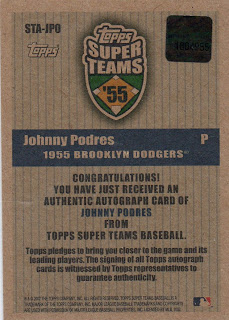 This is my only Podres autograph card. I would love to have one of him in a Los Angeles Dodgers uniform.
Share |
Posted by Dodgerbobble at 8:50 AM