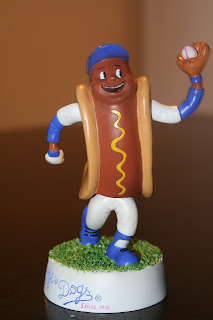 Finally, the last day of the year. This will be my final post of 2010. I will show one more bobblehead . Today's bobblehead is another Christmas gift from my wife, the "World Famous" Dodger Dog bobblehead.

I'm not exactly sure of all the details on this bobblehead, so if someone has some info on it, I'd love to know more. From everything I've read, this little guy was sold at the Top of the Park gift shop at Dodger Stadium in 2002, and there were only 10,000 made.

What we've got here is a Dodger Dog, dressed in a Dodgers' uniform. He's got a dabble of mustard down the middle, and he's also catching a ball. He's wearing pants, and bobbles from the waste. The base of the bobble has a patch of grass and underneath it reads, "World Famous Dodger Dogs Since 1958".

Here's a little info on the Dodger Dog, from LAWeekly:


The Dodger Dog is one of the most famous hot dogs in American sporting (and eating) history. It's iconic, storied and quintessentially Los Angeles.

The Morrell Meat Company was the first to make Dodger Dogs. The Dodger Dog was invented by Thomas Arthur, the very first concessions manager of Dodger Stadium back in 1962. He called it a "foot long dog," even though it was only ten inches. People complained about the name, so he came up with a new one, "Dodger Dog." It was probably a good decision.

In 1972, Farmer John (a big-time Dodgers sponsor) took over the hot dog making duties from the Morrell Meat Company. Then, in the mid 90's, they tried to switch from grilling the dogs to boiling them. The fans were irate, and this terrible new idea was quickly put to pasture.

Today, Dodger Dogs are still the big ticket item (they sell roughly 25,000 per game), but they aren't the only option to satisfy your love of protein cylinders. Your dogs can be offered up steamed or grilled, or in the form of Super Dogs (all beef), picante dogs (spicy) or kosher dogs, courtesy of Hebrew National.


Let's take a look at the Dodger Dog  bobble: 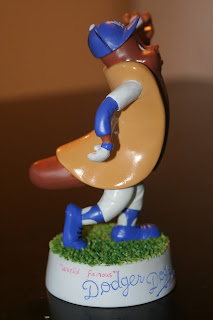 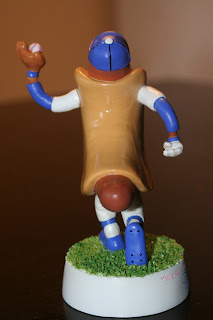 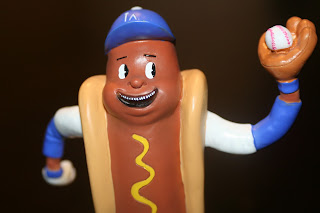 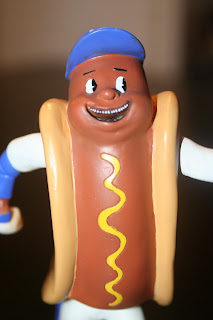 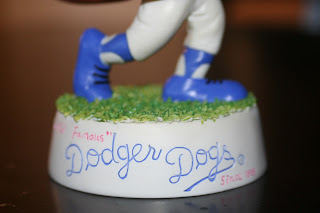 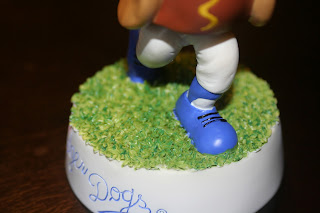 I love Dodger Dogs and I love bobbleheads, which makes this item a favorite in my Dodger collection. This was also one of my "white whales", and I'm happy to have finally gotten my hands on it.
Share |
Posted by Dodgerbobble at 2:30 PM