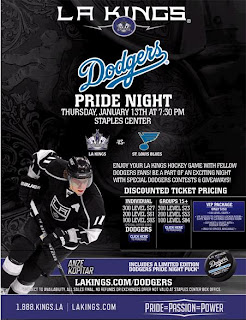 Now it's the Kings' turn to host the Dodgers. On Thursday, January 13, the Los Angeles Kings will celebrate Dodgers Pride Night at Staples Center. 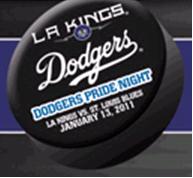 Yesterday, I spoke with Bill Allison from the Los Angeles Kings, he gave me the details on this event. The Kings will be giving away special pucks commemorating Dodgers Pride Night. There will be special ticket pricing if you use the promo code DODGERS, $93 on the 100 level, $61 on the 200 level and $27 on the 300 level. There is also a VIP Package. For $150 you get a ticket on the 100 level, VIP access to a catered locker room suite next to the LA Kings locker room, and a chance to meet Dodger players, although Bill wasn't sure which players would be on hand. There are only 50 VIP spaces available.

It sounds like it's gonna be a fun night. I can't wait to go. Thanks to the Kings and Bill Allison for all the helpful information.
Share |
Posted by Dodgerbobble at 6:51 AM