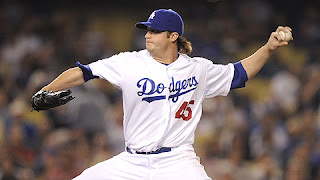 The Dodgers have DFA'd left-handed reliever Brent Leach in order to make room on the 40-man roster for Matt Guerrier.

Leach will try his luck in Japan, as he's signed with the Yokohama BayStars.

In other crappy pitcher news, the Dodgers have signed local boy and former Giant Scott Nestor to a minor league deal. Between Single A San Jose and AAA Fresno, Nestor posted a 5.91 era in 43 appearances.
Share |
Posted by Dodgerbobble at 6:59 AM