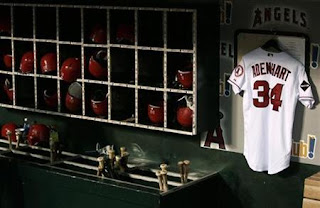 Gallo was convicted in September of three counts of second-degree murder and single counts of drunk driving, hit-and-run driving and driving under the influence of alcohol and causing great bodily injury.The judge in the case sentenced Gallow to 15 years to life on each of the murder counts, with the additional six years added for the other crimes.

Prosecutors said Gallo’s blood-alcohol level was nearly three times the legal limit when he ran a red light in Orange County on April 9, 2009, and T-boned the car carrying Adenhart and his three friends, Courtney Stewart, Henry Pearson and Jon Wilhite. Wilhite was the only survivor. At the time of the accident, Gallo was on probation for felony drunken driving.
Share |
Posted by Dodgerbobble at 10:35 PM