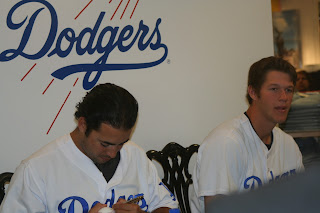 I'm gonna revisit some past player appearances that I attended before I started writing this blog. Today I'm gonna talk about a Dodger appearance in 2009.

On Friday, June 5, 2009, Andre Ethier and Matt Kemp were supposed to appear at the Macy's Men's Store in Northridge. The appearance was to take place from 12:00-1:00pm.  It was a promotion for Father's Day. The deal was you had to buy $75 worth of merchandise, show your receipt to an associate, then you were given a cheap Macy's baseball and sent to a line. There was also a line for people who didn't purchase the merchandise. Those people had to wait until everyone else got their autographs.

I had to work that day, but I wanted to go real bad. Northridge is 10 minutes from my home and I didn't want to miss the opportunity. Knowing how popular Ethier and Kemp are, I figured I would have to get there early. But I couldn't miss work. Luckily my wife went and held a place for me. She got there 3 hours early, and was still 200 people back. When she got to the line she found out Matt Kemp wasn't going to appear. Clayton Kershaw  was going to take his place. Kemp is my favorite player, so I was very disappointed. By I love Kershaw too, so I wasn't too upset.

At around 11:30, I got to Macy's. It was total chaos. It was like the president was showing up. There were hundreds of people there, mostly women who wanted to see Kemp and Ethier. I'm sure many of those women were disappointed when they found out Kemp wasn't going to be there. When 12:00 finally came, Ethier and Kershaw came down to the signing table. As soon as Ethier showed his face the women went nuts. It was like the Beatles on Ed Sullivan. Girls were going crazy. I have never heard anything like that. 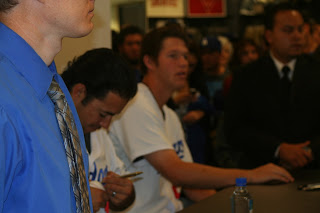 ﻿
We were told that we could only get that cheap Macy's ball signed and that no pictures would be allowed. The line moved very slowly, but when we finally got to the front, Andre and Clayton were very nice. Andre was talkative and Clayton was quiet, just as I expected. They signed the ball, my wife took some pictures from far, and we moved on.


I was real happy to get their autographs, but I must admit, it was the most unorganized event I have ever been to. The signatures on that cheap ball are fading after a year and a half. I don't think it was worth the $75 I was forced to pay.
Share |
Posted by Dodgerbobble at 10:01 PM