Last week, the word floating around the blogosphere was that Dodger legend Sandy Koufax had signed an exclusive deal with Topps. Just as quickly as the news appeared, it then disappeared.

But now it's official. From Topps Blog:

Last week, we tweeted about the autograph deal we signed with Dodgers’ legend Sandy Koufax to appear in various Topps products in 2011. Obviously this is something we are very excited about and hope that you are too. We can now confirm some details about how Koufax will appear in some early-releasing products. We’ll have more for you in the coming days and weeks, but for now…

2011 Topps Baseball Series 1: Koufax will be added to the 60th Anniversary Autographs

As I mentioned, we’ll have more Koufax info for you as we move forward. Stay tuned to Topps for the latest! 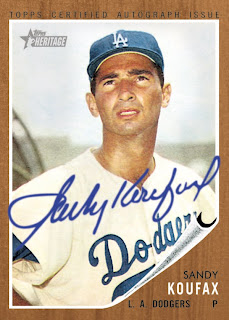