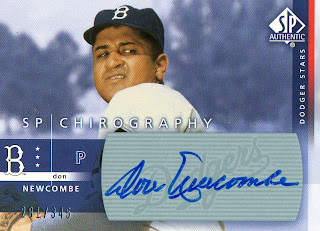 I was thinking about the '55 Dodgers today, particularly Don Newcombe. In 1955, Newk went 20-5, hit seven homeruns and helped the Brooklyn Dodgers win their first World Championship.

He remains the only player in franchise history to win the Rookie of the Year(1949), Cy Young(1956) and Most Valuable Player(1956) awards. You can read Newcombe's bio here.

The Dodgers honored Newcombe with a bobblehead in 2004. You can see my post on his bobblehead here. 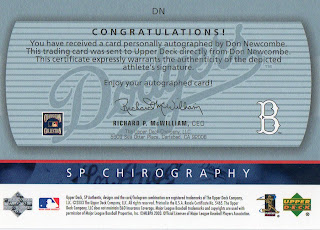 Today I'm gonna show Newcombe's autograph. This is a 2003 Upper Deck SP Authentic Chirography Don Newcombe #281/345. This is a pretty good looking card. I love the blue signatures on the Dodger cards, although there are some flaws in this autograph.

My goal is to get Mr. Newcombe's bobblehead autographed. He still works for the Dodgers as a "Special Advisor" to Owner Frank McCourt.
Share |
Posted by Dodgerbobble at 8:41 PM