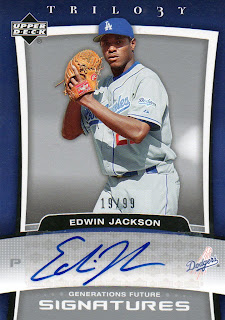 Five years ago yesterday(I was too tired from the Kings game to post this on Friday), the Dodgers traded pitcher Edwin Jackson and minor-leaguer Chuck Tiffany to Tampa Bay for  Danys Baez and Lance Carter. Since then, Jackson has been traded three more times, from Tampa Bay to Detroit, Detroit to Arizona, and finally from Arizona to the Chicago White Sox. You can read Edwin's bio here.

Jackson's biggest career highlight came last year. While with the Diamondbacks, he threw one of the most taxing No-Hitters ever against the Tampa Bay Rays, throwing 149 pitches to accomplish the feat.

So, on the anniversary of the Dodgers trading  Edwin, I'd thought I'd post his autograph. This is a 2005 Upper Deck Edwin Jackson Trilogy Generations Future Auto #'d 19/99. 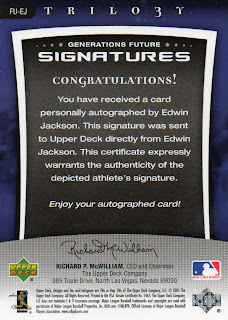