Hong-Chih Kuo Get's A Bobblehead in 2011 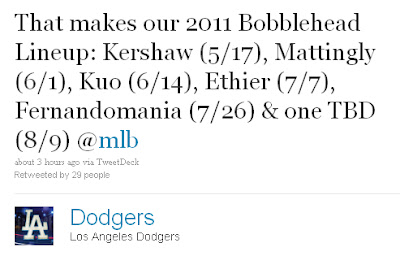 Today, the Dodgers announced who would get one of the two remaining mystery bobbleheads in 2011. So, who is it? The Dodgers have decided to go with Hong-Chih Kuo. Back in October, when I made my 2011 bobblehead predictions, I named Kuo as one of my bobble picks.

I think this is the right move. Kuo had an amzing 2010 season, and deserves  to be honored with a bobblehead.

So, who will get that last bobblehead on August 9? I'm gonna say Chad Billingsley or they may honor someone else from the 1981 World Series team.
Share |
Posted by Dodgerbobble at 2:57 PM