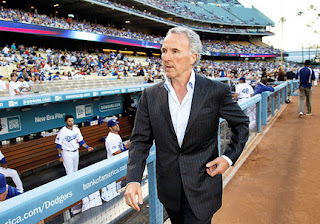 Frank McCourt meets with executives from the commissioner's office. LATimes.com's Bill Shaikin tells us that the Dodgers owner met with several of Selig's lieutenants earlier this week in New York. According to officials familiar with the discussions, McCourt requested the meetings.


It is uncertain exactly what McCourt proposed in his meetings, but he could get hundreds of millions of dollars by either negotiating a new television contract with Fox or selling a minority share of the Dodgers, then using the proceeds to settle his divorce. McCourt has insisted he has no plan to sell any share of ownership.

However, Selig could reject any television contract or partnership agreement. After court documents in the divorce trial revealed how the McCourts diverted millions in team revenue each year for personal use, Selig could cite grounds that such money should be used to improve the team rather than to pay off an ex-wife, one official said.


In addition, the officials said, Selig could refuse McCourt the short-term financing available to owners from MLB.

It is unclear whether such actions could pressure McCourt to the point of putting the team up for sale, whether McCourt would take legal action to stop any such moves, or how any decisions Selig might consider would be affected by Jamie McCourt's contention that she owns half the team.

However, the owner of another MLB club said he doubted Frank McCourt could rally other owners behind him — and against Selig — should the commissioner decide to act.

Dodgers' fourth annual Winter Development Program begins this weekend. The Dodgers' fourth annual Winter Development Program, which helps prepare minor league players for the Major Leagues both on and off the field, kicks off this weekend and will include workouts, community visits, informational seminars and visits to different areas of Los Angeles. Sixteen of the Dodgers' top minor league prospects will be in town for the week-long event and workouts will focus on fundamentals, strength training and conditioning.

How close is Trayvon Robinson? ESPNLosAngeles.com's Jon Weisman gives us all the details on the switch-hitting center fielder.

Dodger in the Dominican and Venezuelan Winter Leagues. Chad at Memories of Kevin Malone gives us a recap on all the Dodgers that played in each league.
Share |
Posted by Dodgerbobble at 10:15 PM