The Dodgers announced today that they would be wearing Brooklyn throwback uniforms for six games this season. The Dodgers are giving fans the opportunity to choose which throwback unis the team will wear. Fans are invited to vote online for which uniform the players will wear beginning Monday, February 7 through Thursday, Feb. 17, at dodgers.com/throwback.

The uniforms will be worn for six mid-week day games.Those games will feature half-price food and drink for the first time ever at Dodger Stadium. Here are the dates of those games:

These are the three uniforms to choose from: 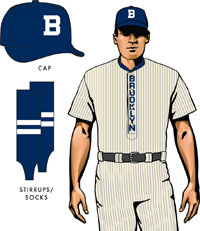 The first of the three uniform options was worn by the Dodgers exactly 100 years ago. The 1911 road uniform features fine narrow pinstripes and the BROOKLYN name displayed vertically in small capital letters down the button panel. Known as the "Superbas," the Brooklyn team wearing this uniform played its second-to-last season in 1911 at Washington Park. 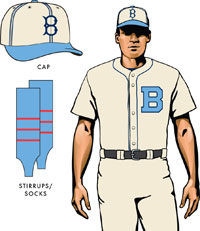 The second option is the 1931 road uniform, which was the only variety of the 1930s uniform designs to sport a block capital "B" on the front of the jersey. 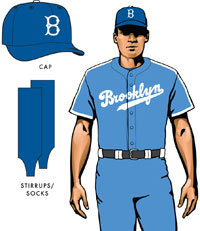 The third option is the 1940s "Satin" road uniform, which is blue and features the trim and DODGERS script in white. With the advent of night baseball at Ebbets Field in the 1940s, the original uniform used a highly reflective satin fabric to be more visible under the lights.

The winning uniform will be announced on Feb. 25, the day before individual tickets go on sale to the public.

The last time the Dodgers wore a throwback uniform was June 23, 2007 in Tampa Bay as part of a "Turn Back the Clock Night" honoring former Dodger player and Rays coach Don Zimmer. That night, the Dodgers wore replica 1955 Brooklyn road uniforms. The Rays also gave away Don Zimmer "Now and Then" Bobbleheads that night. It was a dual Zim nodder, with him wearing both a Rays uni and a Brooklyn Dodgers uni. 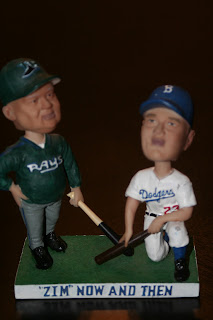 I love this idea. I think it's something the team should have done a long time ago. It also gives Frank McCourt a chance to sell more merchandise. Hell, I might even pick up one of these jerseys.
Share |
Posted by Dodgerbobble at 7:55 PM