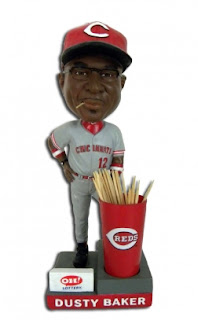 Johnnie B. Baker gets a bobblehead. On July 2, the Cincinnati Reds will be honoring manager Dusty Baker with a bobblehead. This is no ordinary bobblehead though. In Dusty's mouth is a toothpick and on the base there is a toothpick holder. This is one of the more creative designs I've seen on a bobble. Dusty, who is known for chewing on a toothpick or two, should keep one of these in the dugout.

Manny Ramirez gets a bobblehead. On May 29, the Tampa Bay Rays will be giving away Manny Ramirez bobbleheads to the first 10,000 kids in attendance. The last time Manny was honored with a bobblehead was back in 2009, with the "Curtain Call" Dodger bobble.  There is no picture on the Rays version yet. 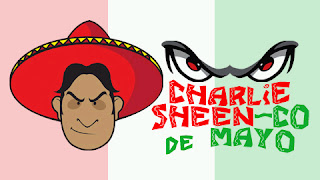 Lake Elsinore Storm will have a Charlie Sheen Night. This will be held on May 5, and will be appropriately called "Charlie Sheen-co De Mayo" night. The Storm, a Single-A affiliate of the San Diego Padres, will also be giving away limited edition Sheen bobbleheads. Some other promotions for the night are a "Wild Thing" glasses giveaway, as well as retiring, for the season, his number 99 from his legendary role as closer Ricky Vaughn, a Rehab-style party on the exclusive Tiki Terrace featuring tigerblood cocktails and a two-for-one Ho Hos special.

Dirk Nowitzki and his bobblehead are winning. Had enough Charlie Sheen? Check out this Dallas Mavericks commercial for Dirk Nowitzki bobblehead night. In the spot, Dirk looks into a mirror, puts on a blonde wig that matches the hair on a bobblehead, and uses Charlie Sheen's catchphrase "winning". It's pretty funny. The bobblehead is pretty nice too.