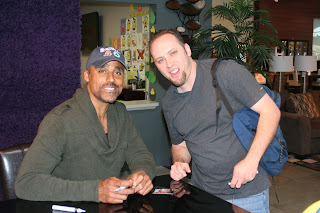 Former Laker Rick Fox made an appearance today at the Living Spaces in Monrovia. The event was sponsored by AM 570 KLAC. Rick was scheduled to appear from 10:00 am to 12:00 pm. I arrived at 9:15. When I got there, they were handing out wristbands. I was number 166 in line.

While waiting in line, it was the same old story. I got to meet some great people. It really makes the time fly when you're chit-chatting with the other fans.

10:00 finally came and Rick hadn't arrived. Vic "the Brick" was there with KLAC, so he got on the loud speaker and entertained us all while we waited. Foxy finally showed up at 10:20.

The line started moving, but it moved very slowly. Rick was signing, talking with the fans and posing for pictures. All of that can make for a long wait. While waiting, I ran into Gus from Authentic Signings. Gus has one of the best autograph collections around. Anyway, he was number 27 in line and he didn't meet up with me until 11:00. At this point, I knew I could be waiting a while. 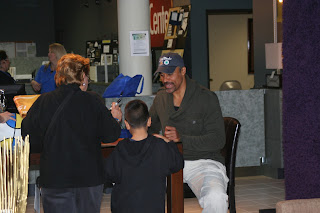 And I was right. I didn't get to the front of the line until 12:00. When I got there, Rick was very friendly. I shook his hand and told him I was a big fan. Then I gave him one of his college cards to have signed. He looked at it and said,"Chapel Hill, very nice card". I thanked him and asked him if he stayed in contact with any of the guys from Carolina, and he said "yeah". He posed for a few pictures, and I moved on. 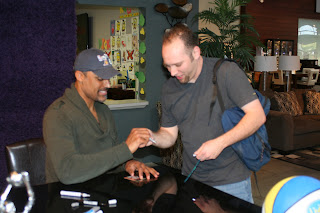 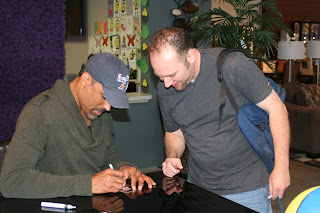 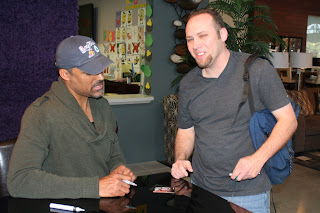 I really wanted to get my Rick Fox Carl's Jr bobblehead signed, but I have it stored away. The family in front of me had theirs though. It turned out nice. 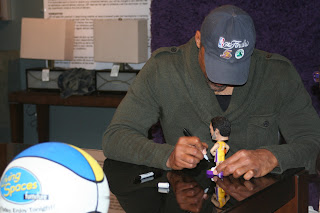 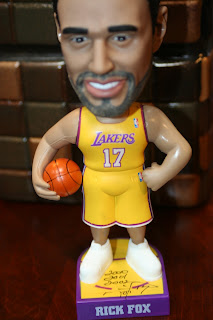 I want to thank Rick Fox, KLAC and Living Spaces for everything today. I want to give a shoutout to Alejandro, it was nice to meet you in person! And Gus, check out his site authenticsignings.com. It was also nice meeting Mario and Richard.
Share |
Posted by Dodgerbobble at 2:49 PM