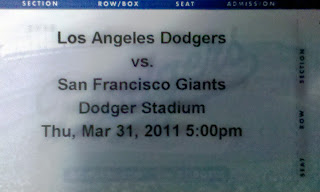 Yay! Opening Day is finally here. After a disappointing 2010 season, and what seemed like an eternal offseason, the Dodgers will start 2011 at home against the hated San Francisco Giants. I can't wait to get to Dodger Stadium for the first time this year. It's gonna be hard to top my experience on Opening Day 2010, but I'm sure I'll have a great time.

No big surprises at all, except that Don Mattingly went with three catchers. Three non-roster invitees made the team out of Spring Training, Mike MacDougal, Lance Cormier, and Aaron Miles. 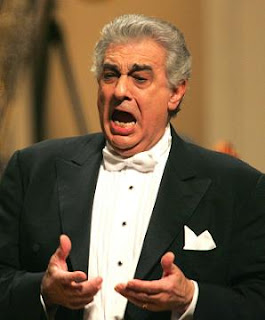 Opening Day will be televised nationally on ESPN as the network's first Thursday Night Baseball game of the season. PRIME TICKET will deliver a special one-hour pre-game show from Dodger Stadium beginning at 4:00 p.m.

Auto and stadium gates will both open early on Opening Day and fans are encouraged to carpool and arrive early, as auto gates will open at 1:00 p.m. and stadium gates will open at 1:30 p.m. Fans can also take the free Dodgertown Express Bus Service from Union Station to Dodger Stadium, as they can for every game this season. More information about the bus service and parking are available at www.dodgers.com/parking.

The first 50,000 fans at Thursday's game will receive Magnet Schedules presented by Automobile Club of Southern California.
Domingo who performed as one of the Three Tenors at Dodger Stadium in 1994 and is a 12-time Grammy Award-winner, will perform the National Anthem. His humanitarian work has earned honors ranging from the Presidential Medal of Freedom to Honorary Knight of the British Empire and many more. He currently serves as the General Director of the Los Angeles Opera and the Washington National Opera and lives by the motto "If I rest, I rust."

Before the National Anthem, the Dodgers will observe a moment of silence for those whose lives were lost as a result of the earthquake and tsunami in Japan. Major League Baseball and the Major League Baseball Players Association (MLBPA) have joined together to contribute $500,000 toward earthquake and tsunami relief efforts in Japan to UNICEF. Dodger pitcher Hiroki Kuroda has made a personal donation to the cause and the Dodgers will also collect donations for UNICEF at locations throughout the stadium.

Gaines will sing God Bless America during the seventh inning stretch. He is best known for his role as the Phantom in The Phantom of the Opera and remains Los Angeles' longest-running phantom.

Continuing with the 1981 theme of Opening Day, former Dodger Bill Russell will sign autographs for fans in Autograph Alley. Russell won a World Series with the Dodgers in 1981, as well as in 1988, and was a member of the Dodgers' record-setting infield. Autograph Alley will feature stars of '81 throughout the Dodgers' opening homestand.

Approximately 136 members of the Army, Navy, Air Force, Marine Corps, National Guard, Coast Guard, LAPD and LAFD will unfurl a giant flag on the day during pre-game ceremonies. A Joint Services Color Guard will present the colors and pre-game ceremonies will conclude with a flyover by a B-2 from Whiteman Air Force Base.

The Dodgers will also honor their first Veteran of the Game on Thursday, as they will at every home game this season. Second Lieutenant in the US Army Steven Hole will be the first honoree, as he won the home run hitting contest at the Military Batting practice the Dodgers hosted on Veteran's Day in November. Hole played football at West Point and is a third-year medical student at USC.

For the first time ever, Dodgers Magazine is offering a cover unique to Opening Day, featuring starting pitchers Clayton Kershaw and Tim Lincecum. Fans can only purchase this version of the magazine at Dodger Stadium merchandise stands on Opening Day. The cover story features Kershaw, who with his wife Ellen volunteered to help build a school in Zambia during the offseason, and other stories including Roger Kahn's first-person reflection on Duke Snider and a photo essay on the late Hall of Famer. Dodger first base coach Davey Lopes also talks about Dodger Hall of Famer Jackie Robinson. Fans can subscribe to Dodgers Magazine at www.dodgers.com/magazine or by calling 877-258-3062.

The 2011 Los Angeles Dodgers Yearbook also makes its debut on Opening Day and features a cover depicting the art from several of this year's Dodger billboards and highlighted by the tagline "It's time for Dodger Baseball." Inside are features on new Dodger Manager Don Mattingly, a look back at the Dodgers' 1981 World Series title and biographies of current players. The yearbook is available at all merchandise stands and can be ordered online at www.dodgers.com/magazine.

The first edition of Dodgers Playbill for the 2011 season features a cover highlighting the rivalry between the Dodgers and the Giants. Inside are a preview for the series, a look back at some of the great games in Dodgers-Giants history and ticket deals that fans can take advantage of this season.
Share |
Posted by Dodgerbobble at 6:13 AM