What a day. It really felt like Christmas. I woke up this morning and all I could think about was getting to Dodger Stadium to see the Dodgers take on the San Francisco Giants.

When I finally got there, I met up with my buddy Albert, who was waiting at Autograph Alley for me. Former Dodger Bill Russell was signing. Russell got there at 2:30. He signed a card, a hat and a postcard for me and my wife. He also took pictures with us. 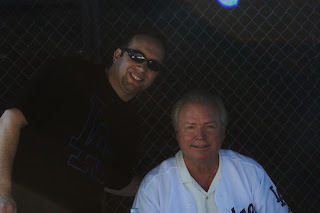 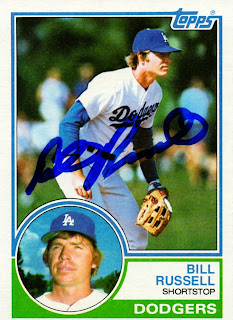 After we left Autograph Alley, it was time to get into the Stadium. We sat in the All You Can Eat Right Field Pavilion. The crowd was energetic, and everyone was ready for the game to start.

There were a few planes flying pro-Giants banners.  There was one banner that read "SF Giants 2010 Champions Beat LA". It was so far away, and so small that it made it very difficult to see what was written on them. 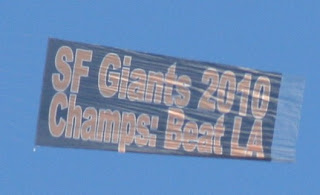 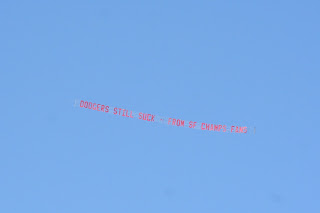 The Opening Day ceremony was very simple. Plácido Domingo's rendition of "The Star Spangled Banner" was amazing. Then Fernando Valenzuela came out with Tommy Lasorda. Fernando threw out the ceremonial first pitch, and the crowd went nuts. Then, Vin Scully got on the jumbotron and told the crowd "It's Time For Dodger Baseball", and the season had officially started. 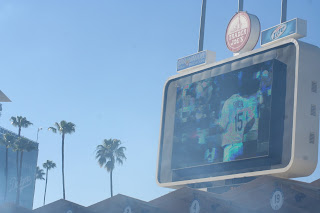 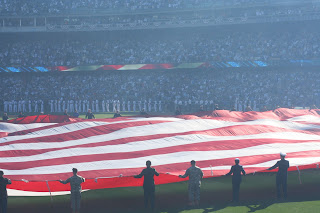 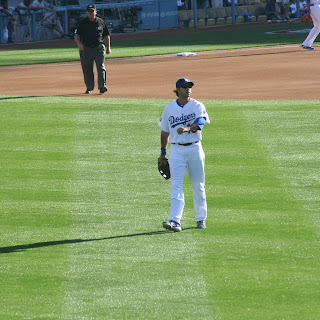 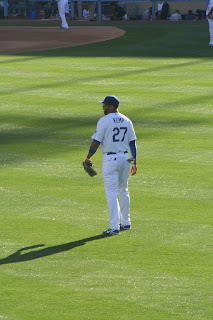 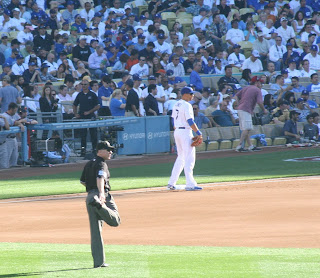 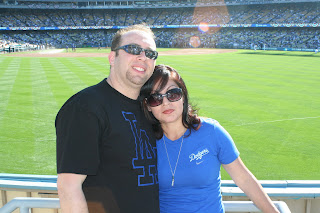 Then it was game time. Clayton Kershaw was brilliant. It was a pleasure watching the kid pitch. Tim Lincecum was pretty good too, but Clayton just outperformed him.Kershaw struck out nine in seven scoreless innings while allowing four hits and only one walk. He left the game winning 2-0.

When Broxton came into save the game in the ninth inning, there were a lot of worried fans. He ended up surrendering a solo homerun, but in the end he got the save. Dodgers won 2-1.

Everything was right in Dodgertown. The Dodgers beat the Giants on Opening Day. Even though it was hotter than hell out there,  I had a great time.


Here's some video of the Opening Day ceremony. I shot it with my phone, so the audio is a bit distorted.