First off, I'd like to announce that I will be holding at least two contests in the next few weeks, both prizes will be bobbleheads. One of the contests will be for the upcoming Clayton Kershaw bobblehead the Dodgers will be giving away on Tuesday, May 17. So, if you can't make it to Dodger Stadium that night, or just want to add Kersh to your collection, you'll have an opportunity to win one here, courtesy of Bobbles Galore. I'll have all the details in the next few days.

My next bit of news involves the Andre Ethier bobblehead the Dodgers will be giving away on Thursday, July 7. A little birdie whispered in my ear today and gave me some details on this bobblehead. Andre will be wearing a throwback Brooklyn Dodgers uniform, the same uniform the Dodgers are wearing  for six day games this year. I got some of the other details on the bobblehead, but that's all I'm allowed to share. Remember you heard it hear first.

OK, let's get to some other bobblehead news from around baseball: 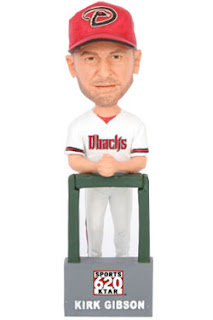 DBacks Post Kirk Gibson Bobblehead pic. Back in February, I mentioned the Arizona Diamondbacks would be giving away bobbleheads of current manager and former Dodger Kirk Gibson. They finally showed us a picture. The bobblehead will be given away on Saturday, August 6 when the DBacks host the Dodgers. I know they'll be many Dodger fans at Chase Field that night. I might be one of them.

Cincinnati Reds to give away five Bench Bobbles. Beginning this Friday, the first in a series of five Johnny Bench collectible bobbleheads will be available free with full-price paid admission to the Reds Hall of Fame & Museum on Fridays, Saturdays and Sundays throughout the month of May. Only 5,000 of these bobbleheads have been produced. The bobblehead series continues each month through September with a different classic pose that highlights iconic moments and images during Bench's career.

Trevor Hoffman bobbleheads to become Jesus bobbleheads? Not really. In the pilot episode of the "Paul Reiser Show",one of Paul's friends owns a giant warehouse full of obscure items including 50,000 Trevor Hoffman bobbleheads, which he says he'll be selling to Bolivia, where they'll be turning them into Jesus bobbleheads. It's pretty funny. I saw the first episode, and thought it was OK. It was a poor man's "Curb Your Enthusiasm. NBC didn't seem to care for the show, they cancelled it after two episodes. Check out the clip below.