Kershaw Takes The Mound, Kuo To The DL 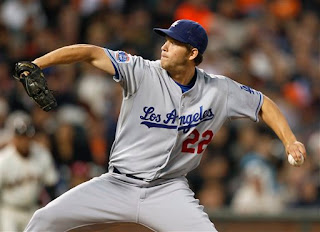 The Dodgers send Ace Clayton Kershaw to the mound tonight (2-1, 1.37 era). He faces righty Kyle McClellan (1-0, 2.25 era). After last night's debacle, it's nice to have Kersh going. With the Dodgers struggling, he's one of the few bright spots on this team. In 19.2 innings pitched, he's got 24 strikeouts.

The Dodgers placed Hong Chih Kuo on the disabled list today. From Tony Jackson of ESPNLosAngeles.com:


Los Angeles Dodgers reliever Hong-Chih Kuo was placed on the 15-day disabled list before Saturday night's game against the St. Louis Cardinals with a lower-back strain. Kuo had been bothered by back discomfort all season, a fact that might have affected his mechanics and contributed to his uncharacteristic four walks in 2 2/3 innings.

The move was made retroactive to Thursday, meaning Kuo will be eligible for activation as early as the team's April 29 series opener against the San Diego Padres.

At least it's not because of his elbow. Let's see if Tron can get back to his 2009 form.