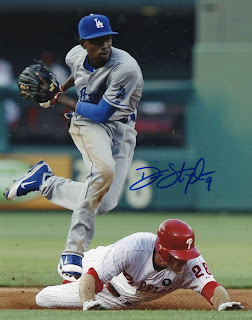 Dodgers rookie Shortstop Dee Gordon made an appearance on Saturday at the OC Dugout in Anaheim. He was scheduled to appear from 5pm to 7pm.

I arrived at the OC Dugout at 4pm and I was very early. Although Gordon was scheduled to appear at 5pm, he couldn't show up until the Dodger game ended. When I got there, there were only about 25 people in line. One of those people was Martin from Trutotheblue. I've talked with Martin so many times online, but it was a pleasure to finally meet him in person. Of course the Dodger game ran long, and so did the line. We were told that Dee would sign for two hours regardless of when he arrived. 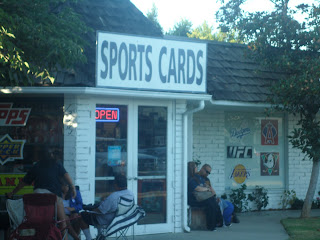 While we were waiting for the game to end, the nice people at OC Dugout treated us to pizza and drinks. I couldn't believe it, I went to two player appearances, two days in a row, and both times I was treated to pizza! While we were eating, the game finally ended on a Matt Kemp walk-off homerun. Finally.

Dee arrived at the card shop about 45 minutes after the game ended. He rolled up in a new Dodge Challenger with the windows down, so we all knew it was him. He began signing right away. The staff started bringing people in ten at a time. Dee was very nice, taking pictures with everyone. I love paid events, they're are less people there, and the players are much friendlier. I got an 8x10 signed, took a pic with Dee, and got my butt back on the freeway. It was so easy. 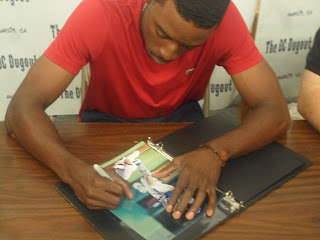 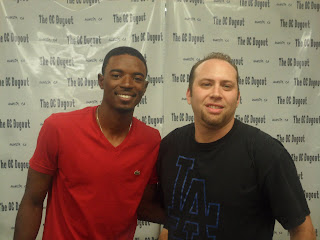 I had a real nice time on Saturday. Thanks to the OC Dugout, the staff there were very friendly, and the whole thing went very smoothly.  Thanks to Dee Gordon. I am so happy I finally got his autograph. I also want to give a shoutout to Alejandro, Ramon and Martin, it was nice chatting with you guys, you made the time fly by.
Share |
Posted by Dodgerbobble at 9:40 PM