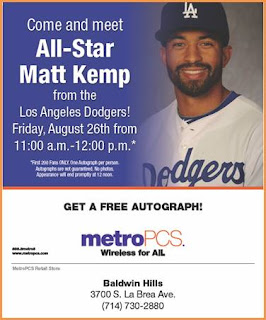 Dodger Centerfielder Matt Kemp made an appearance today at the Metro PCS Store in Baldwin Hills. He was scheduled to meet with fans and sign autographs from 11:00am to Noon and only for the first 200 people in line.

I had been planning on going to this event for the last few weeks, and I knew I was gonna have to arrive early. Matt made an appearance at Living Spaces a couple of weeks ago, and people began lining up for that at 7pm the night before. I knew people would do the same thing this time around even though it was a Friday. And I was right. I got a call from my buddy Greg, who lives close to the Metro PCS Store, at 9:00 letting me know there was already 30 people in line. It was time to start heading down there. This would be my first time camping out for an autograph.

I drove drove down there with Teresa, and we arrived at around 10:00. We were about 50 people back at the time. That number was going to change as it got closer to meeting Matt Kemp. 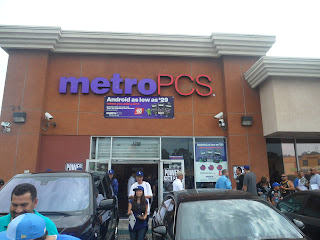 We were about 13 hours away from meeting Matt, but the time flew by because a group of us chit-chatted all night. We really entertained ourselves. Out of all of us in the group, I was the only one to get some shut-eye. And I needed it after a long day at work. I don't think I would have been in good shape if I hadn't taken a nap.

Before I fell asleep though, we were all surprised with a little treat, a free midnight snack courtesy of the man himself, Matt Kemp. A group of very smart people at the front of the line were in communication with Matt via Twitter. They let him know we were camping out all night for his autograph, so he treated us to pizza. There were about 80 to 100 of us there at the time, and we all were munching on Papa Johns. Thanks to Matt and everyone who made that happen. After I ate, I passed the hell out.

It was about 6:30 am when I woke up. There were a few hundred people there, and the line was starting to get messy. The Metro PCS staff got there at 9:00 and started handing out wristbands at around 9:30.  Once the wristbands were given, the line straightened up. 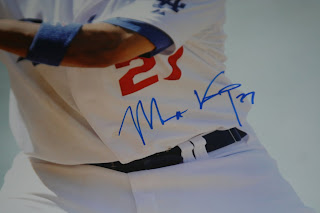 Matt arrived on time, and the line started moving as soon as he got there. We were told one signature per person, and no pictures with him. Matt's agent, former Dodger pitcher Dave Stewart, was there too, and signing autographs. I brought my "King of Swing" poster for Matt to sign, and my Clinton Dodgers bobblehead for Dave Stewart to sign.  Both of them were very nice. Matt signed the poster with his name and number in blue Sharpie. Dave signed the bobblehead in silver Sharpie. This is the third time I have met Matt, so I didn't care to chat with him or take a pic, even though other people were getting pics with him. I just wanted the auto after such a long night. I was a bit excited to meet Stewart though, who I hadn't met before. Not only did he sign, he took pics with people too. 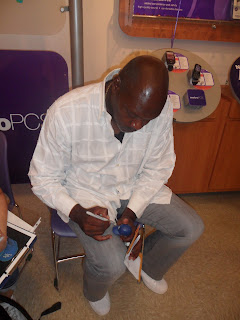 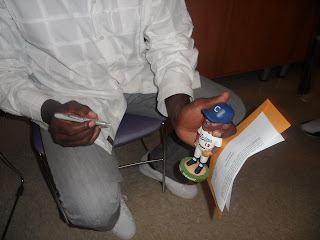 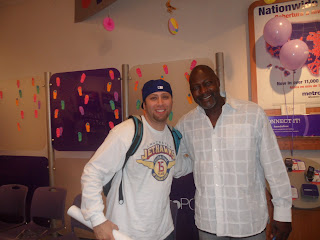 All-in-all, I'd say I had a good time, but I don't think I'll ever camp out like that again. It was just too much for me. To everyone I hung out with last night, I had a great time. It was also very nice meeting Jesse and Clint. Thanks to Matt Kemp, Dave Stewart, and Metro PCS for everything today.