A Review Of The 2011 Dodger Bobbleheads

Tonight I'm gonna review the 2011 Dodger Stadium bobblehead giveaways. All six bobbleheads will be given a grade of A, B,C,D or F. The grades will be based on a few things: (1) Did the bobblehead look like the player?  (2) Did the player deserve a bobblehead? and (3) Creativity.

Clayton Kershaw  A-
On May 17, the Dodgers gave away the first bobblehead of the year, Clayton Kershaw. I was so happy to get my hands on this first bobblehead, and it didn't disappoint. The Ace of the Dodger staff definitely deserved a bobble. I love the way they made Kersh look, from the beard to the green eyes and even the leg kick. But it's that simple stance that keeps this bobblehead from getting an A+. Maybe Kershaw get's a Cy Young bobblehead in 2012? I hope so. 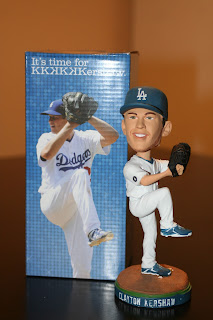 Don Mattingly  C
This bobblehead night was unlike any other I had seen in the past. On June 1, the Dodgers were supposed to give away 50,000 Don Mattingly bobbleheads away. The only problem was, 50,000 people didn't show up. In my original post, I estimated the attendance at under 30,000 fans. This was the deadest I had seen the stadium since I started going to bobblehead nights on regular basis back in 2002.

What I like about this bobblehead is that it looks like Don Mattingly, and that he's standing at the top of the dugout steps. The manager at the top of the dugout steps was a common theme in baseball this year. The Orioles, Royals, Padres and DBacks all gave away similar bobbleheads. It's very creative and helped get this bobblehead a C grade. What kept it from getting a higher grade was the fact that Don Mattingly didn't deserve a bobblehead in 2011. A  player or manager should get a bobblehead if he has accomplished something with the team. What has Mattingly done for the Dodgers? Nothing yet. 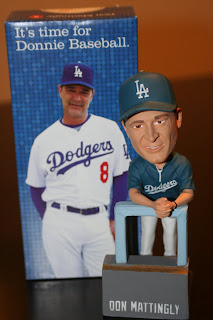 Hong-Chih Kuo C
Kuo, Kuo, Kuo. What a year for the Taiwanese pitcher. Who could have seen such a drastic change from 2010 to 2011? His horrible 2011 isn't the reason I'm giving this a C grade though. He definitely deserved a bobblehead after his amazing 2010. I'm giving this a C because this doesn't look like him and the stance is all wrong. I know he's giving the fist pump after a strikeout, but it just doesn't look right. The other thing is it lacks a certain something. In 2008, the Dodgers gave away Takashi Saito bobbleheads, and his name was put on the bobblehead in Japanese. They could have done something similar with Kuo, except with Taiwanese. In my opinion, this is a boring bobblehead, plain and simple. 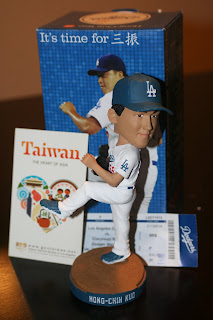 Andre Ethier B
This Brooklyn throwback version of Andre Ethier was a big success back on July 7. Dodger Stadium was packed and that's the way it should be on a bobblehead night. The Dodgers honored Dre with his second bobblehead in two years. This time around they had him wearing the same 1940's-style Brooklyn Dodgers uniform the team was wearing during day games this year.

This bobblehead kind of looks like Andre. The hair and beard stubble on his face are dead on, but the facial features are a little off. The uniform is sweet, and that's a big plus. I also love the fist pump. I couldn't give this an A grade for one reason: it's the second Andre Ethier bobblehead in two years. I'm not saying he didn't deserve one in 2011, because he did. It's just that the Dodgers could have given someone else a bobblehead. There are other players who are just as deserving, like Chad Billingsley or a even a former player. 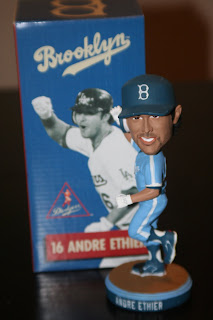 Fernando Valenzuela B
The Dodgers celebrated the thirtieth anniversary of Fernandomania with one of the nicest bobblehead giveaways ever. This nodder depicts a 1981 version of Fernando Valenzuela standing on the warning track, in front of the scoreboard, with a pen in hand and signing a mitt. The bobblehead looks like Fernando, it's very creative and Fernando definitely deserved a bobblehead for the the anniversary. This is Fernando's third Dodger bobblehead since 2001 though, and that's what's keeping this from getting an A. Yes, Fernando is still popular in Los Angeles, but like I said with Ethier, there are other players who deserve a first bobblehead. I think they should have gone with someone from the 1981 Championship team. 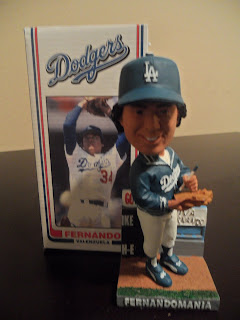 Duke Snider A
After passing away earlier in the year, the Dodgers decided to honor Duke Snider with a bobblehead. This was my favorite bobblehad of the year. What makes this my favorite? First off, it looks like the Duke. Second, the stance is right on. Third, he was one of the greatest Dodgers of all-time, and deserved a bobble.   Is this the most creative bobblehead of the six? No, but it didn't need to be. The Duke swinging the bat in a Brooklyn Dodgers uniform was all I needed. It really has a "classic" feel to it. Great job on this one. 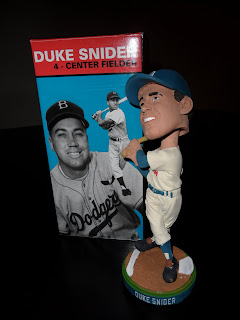 Overall, I'd say the Dodgers did a decent job on the bobblehead giveaways. I do feel that six bobbleheads was overkill though. It wasn't necessary to give that many away. I love my bobbleheads, but they could've done without the Mattingly and Kuo. Next year I hope to see only three or four given away. Hopefully all of them are first-time recipients, well, unless Kershaw gets a Cy Young bobblehead of course. Speaking of next year's bobbleheads, I will be giving my predictions on 2012 very soon.

So, what did you think of my grades? Did I get them all right? Let me know what you think.