I've picked up a few Dodger autographs over the last few weeks. What I've been doing is trying to concentrate on some of the youngsters in the organization.

Here's a 2004 Javy Guerra/Justin Orenduff Upper Deck SP Prospects dual auto /175. Javy Guerra, the Dodgers current Closer, has been one of the few bright spots in this terrible 2011 Dodgers season. Can't say much about Orenduff, who retired from baseball in 2009, then came back to the Dodgers in 2011. He was released in July after posting an era of almost 9. 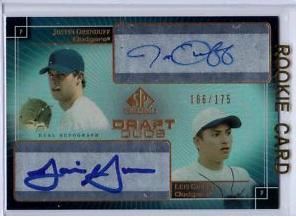 Ivan DeJesus Jr. has been up and down between the Dodgers and AAA Albuquerque a couple times this year. I'm sure he'll get a September call-up, but will he be on the roster next April? We'll see. Here's his 2007 Bowman Chrome Auto. 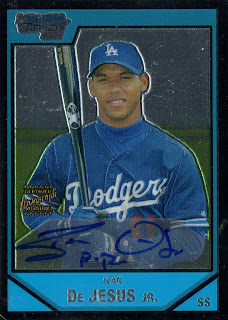 Another guy who's made a few trips between LA and Albuquerque is Jon Link. Link, who came to the Dodgers with John Ely in the Juan Pierre trade, has had a mediocre 2011 down in AAA. This is his 2010 Topps Chrome Auto. 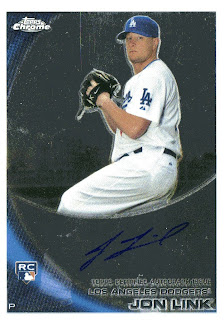 One of the guys I'm most excited about in the Dodgers organization is Jerry Sands. He's another guys who's sure to get a September call-up, and hopefully he's a regular player in LA next season. Here's his 2010 Bowman Platinum Auto. 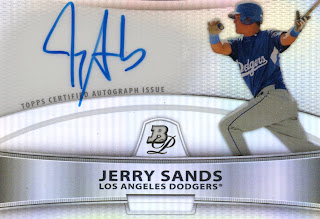 One of my latest pick-ups is this 2011 Topps Pro Debut Garrett Gould Auto. Gould was the Dodgers second round pick in 2009. He's currently playing for the Single-A Great Lakes Loons in the Midwest League, and has made some great strides over the last couple years. 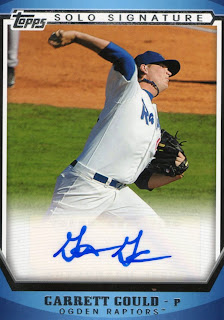 This last Dodger auto is one I wish I didn't have, but I figured I should pick it up in case anything becomes of him. This is a 2007 Upper Deck National Signatures Tim Federowicz Auto /275. TFed came from the Red Sox in the Trayvon Robinson trade. Robinson, of course was a top prospect in the Dodger organization and was sent to Seattle in the three-team deal. Federowicz well, he wasn't even a top ten prospect for the Sox. But the Dodgers lacked depth at the catcher position. Thank you Ned. 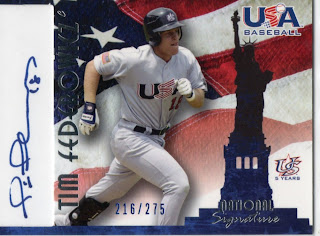