Former Dodger Firstbaseman Steve Garvey made an appearance today at Sports Authority in Ontario. He was scheduled to meet fans and sign autographs from 1:00-2:30pm. 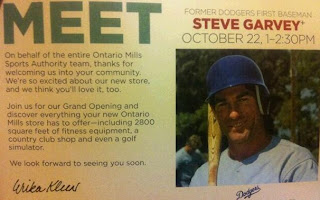 The Sports Authority at Ontario Mills held it's grand opening today. To celebrate, they gave away mystery gift cards to the first 250 people in line, a $500 shopping spree and had Garvey in for autographs. When we arrived at the store, about 200 people were in line. Once the Sports Authority staff started letting people in, the mystery gift cards were handed out at the door. They were scratchers, with a chance to win $5-$500. The card had to be used at that store that day and no purchase was necessary to use the card. I got a $10 card, so I just picked up a couple of baseball cubes and some snacks, then got in line for Garvey. This line was considerably shorter than the line for the gift cards. 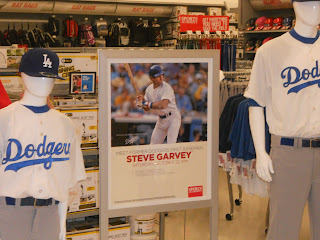 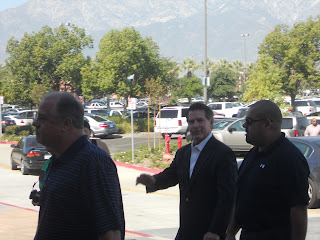 Mr. Garvey arrived right at 1:00 and started signing about 15 minutes later. The staff took us in groups of thirty and told us one autograph per person and no pictures were allowed. Once I got to the front, I had him sign a baseball and I asked him for a pic, which he was happy to do.

After we got our autos, we jumped back in line for another. Time really was flying at this point. It was about 2:15 when we got to the front of the line, and we weren't sure if we'd get back in for the second signature. Luckily, we just made it. Garv was signing a little bit longer because of his late start, so I had him sign a baseball card. 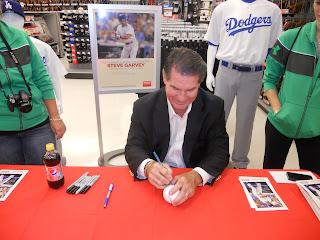 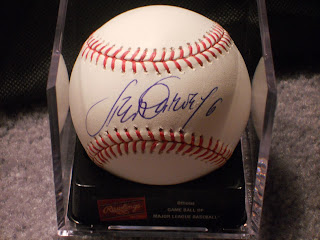 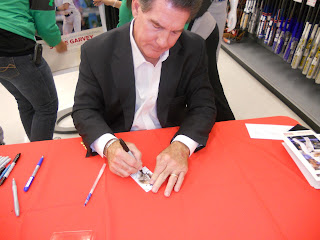 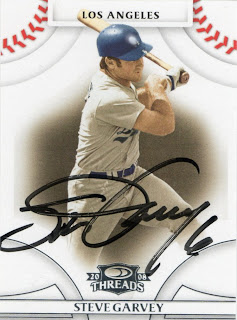 Today's event went very smoothly. The Sports Authority staff was very friendly and organized and Mr. Garvey was great as usual. Thanks to Gustavo of Authentic Signings for the tip on today's event and thanks to Alex of Lawler's Law and Andy for all your help. It was great seeing everyone else today too!
Share |
Posted by Dodgerbobble at 8:54 PM