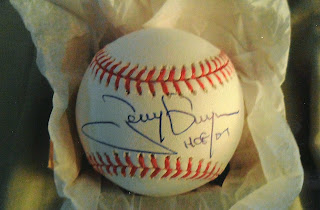 Yesterday I had one of those rare days where I went from one location to another and got more than one autograph. I actually was able to get three autographs yesterday.  The first one I got was 150 miles away in San Diego from Hall of Famer Tony Gwynn. The other two, Clippers Forward Blake Griffin and Skateboarder Rob Dyrdek, were at the Los Angeles Auto Show. I'll share my experience with Mr. Gwynn today and move onto Griffin and Dyrdek later.

Former San Diego Padres All-Star and Hall of Famer Tony Gwynn made an appearance yesterday at El Cajon  Ford. He was scheduled to meet fans and sign autographs from 9-10:00 am.

I made my 150 mile journey from the San Fernando Valley down to El Cajon with three friends early Saturday morning. It took us about 2 hours to get down there. Surprisingly, there were only two other people waiting in line when we arrived.

While we were there, my buddy Alex was giving me updates from the Los Angeles Convention Center where Blake Griffin was scheduled to sign at 1:00pm. That too was a surprisingly short line.

Mr. Gwynn arrived about 15 minutes early and started signing right at 9:00. I had heard some horror stories about Tony being snappy at past events. When I got to the signing table he was very friendly, autographing my baseball and was even joking around. But sure enough, the guy behind me got him upset. The gentleman behind me had a picture of Tony in a San Diego State basketball uniform and Tony wanted to know where he got it. The guy said he bought it from someone in line and before you knew it, Tony was out of his seat wondering who the guy was. After this person was pointed out, Tony made it clear he didn't want any of his pictures sold there because it was theft. The General Manager at the dealership even announced it over the loudspeaker. The whole ordeal had us all laughing. 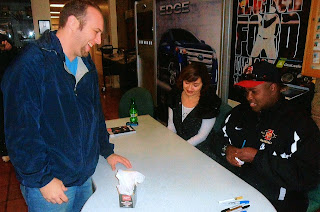 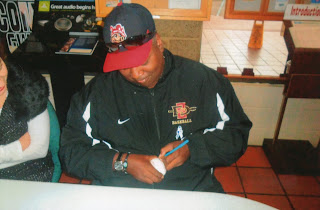 When we left the Ford dealership, I got another update from Alex at the Convention Center, and there were just five people there in line. Maybe we had a chance to get Blake Griffin's auto too? So we got on the freeway and hauled ass to Downtown LA. As I already mentioned, we did get Blake's autograph, but I'll save that for another day.
Share |
Posted by Dodgerbobble at 7:29 PM