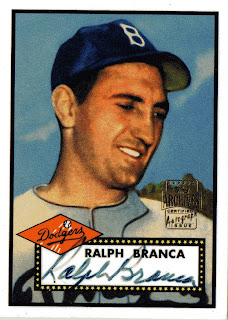 
Ralph Branca is probably best remembered for one pitch. That pitch was thrown in a playoff game on October 3, 1951 against the rival New York Giants.

Branca entered the game in the ninth inning and surrendered a walk-off homerun known as "The Shot Heard 'Round the World" to Bobby Thomson, giving the Giants the National League pennant.
Branca later learned from Detroit Tiger Ted Gray that the Giants had stolen the signs to the two pitches he threw Thomson. That rumor was confirmed in The Wall Street Journal in 2001, when Giants Sal Yvars admitted that he relayed to Thomson the stolen signs for Branca's fastballs. Joshua Prager detailed the revelations in a book entitled The Echoing Green: The Untold Story of Bobby Thomson, Ralph Branca and The Shot Heard Round the World. Thomson acknowledged to Prager that the Giants had stolen signs in 1951 but denied that he had foreknowledge of the pitch he hit off Branca for the pennant-winning home run. According to Branca, Thomson admitted to accepting the stolen signs during his first three at-bats of that game, but claimed that he did not do so in the final at-bat; Branca indicated that he did not believe Thomson's denials and remained convinced that Thomson was in fact tipped off on the fateful pitch.

Despite giving up one of the biggest homeruns in baseball history and the circumstances surrounding it, Branca was never bitter. In fact, he developed a friendship with Bobby Thomson that lasted until Thomson's death in 2010.


Another interesting fact about Branca is that he was half Jewish. Even though he was raised Catholic, his mother, who immigrated to the United States in 1901, was a Hunganrian Jew who converted to Catholicism. Branca had relatives who died in the Holocaust. It's a pretty interesting story which is also told by Joshua Prager. You can read about it here.


Anyway, in honor of Ralph Branca's birthday, I wanted to show the one autograph I own. This is a 2001 Topps Archive Ralph Branca Certified Autograph 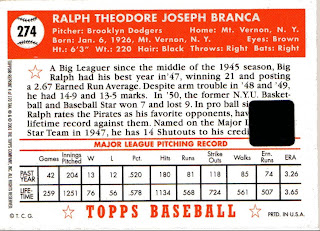 Even though this happened way before my time, I hate watching the Giants win anything.
Share |
Posted by Dodgerbobble at 9:52 PM