Missed It By That Much 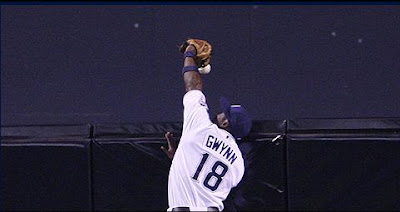 With the Dodgers down 3-2 in seventh inning, Matt Kemp hit a two-run homerun off of Padres pitcher Luke Gregerson to give LA a 4-3 lead. Centerfielder Tony Gwynn made an attempt at catching it over the wall, but it went through his glove.

It was nice to see Matt hit that homerun tonight. It was Kemp's eighth home run on the season, but only his first since April 21. He hit it to the deepest part of Petco Park, which was very impressive. Hopefully this gets Matty going.
Share |
Posted by Dodgerbobble at 11:20 PM