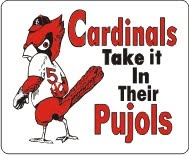 The Dodgers completed the home sweep of the Cardinals tonight. The last time that happened was in the magical 1988 season.

Dodgers tap into 'V energy'. Frank and Jamie McCourt quietly hired a Russian emigre who calls himself a scientist and healer to 'think blue' and channel his thoughts toward the team's success as he watched them play on TV. This is a weird story.

Carlos Monasterios is getting another start. Joe Torre said he would give rookie Carlos Monasterios one more start Sunday, against the Anaheim Angels, before possibly returning the job to Opening Day starter Vicente Padilla.

Day 3 of the MLB draft was today. Memories of Kevin Malone has details on all the Dodgers picks.

Speaking of Dodger draft picks, one of those picks was Andre Ethier's younger brother Devon. The 20-year old was selected in the 32nd round out of Gateway Community College in Phoenix. I'm sure this will make a few female Dodgers fans happy.
Share |
Posted by Dodgerbobble at 10:12 PM