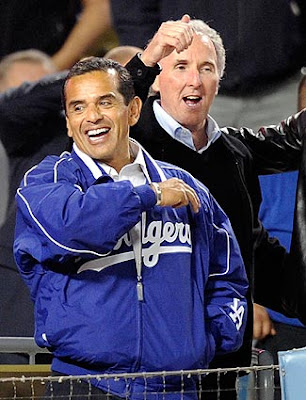 All the excitement I had before the Dodgers/Yankees game went away as I watched the Dodgers lose again. The offense is painful to watch. Yes, I know the Yanks had CC Sabathia on the mound, but this Dodger offense is bad. Some changes need to be made. I hope to see Joe Torre shake up the line-up a bit today. The Dodgers are facing a cold AJ Burnett tonight, who's looking to avoid losing five straight starts for the first time in five years. The Dodgers need to jump all over Burnett. We'll see what happens. The game is starting at 4:00 pm.

Antonio Villaraigosa really likes going to Dodger games. More than 400 pages of records include an e-mail exchange in which a lobbyist for Staples Center's owner seems to advise how the mayor could cite 'official' business as a way to accept free tickets. Lawyers for the Los Angeles Mayor named the Dodgers as the most frequent donor of his free tickets.

Charlie Haeger had been designated for assignment. With Chad Billingsley coming off the disabled list Monday, the knuckleballer became expendable. He was 0-4 with an 8.40 earned-run average in nine games, including six starts. Placed on the disabled list May 9 because of a minor foot problem, he pitched only twice in the last 6½ weeks. He was charged with four runs and five hits in 4 2/3 innings in his last start against the Angels.

Andrew Lambo is back with the Chattanooga Lookouts. The Dodger prospect returned from a 50-game suspension after testing positive for marijuana back in April. He went 1 for 4 in his first game back.

Prentice Redman suspended 50 games. The Minor League journeyman was suspended for 50 games for testing positive for an amphetamine, according to the Office of the Commissioner of Major League Baseball. Redman was batting .332 with 10 homeruns and 41 RBI for the AAA Albuquerque Isotopes.
Share |
Posted by Dodgerbobble at 8:58 AM