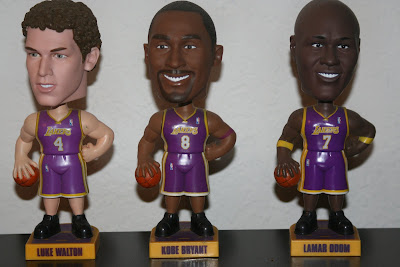 So, the 2009-2010 NBA season comes down to this, one game. The Lakers and Celtics will square off tonight at Staples Center in Game 7 of the NBA Finals. The winner of this, the very last game of the year, will be crowned champions.

In Game 6, we saw a flat Boston Celtics team. I doubt we'll see the same performance out of them in Game 7. The strange thing is, we haven't really seen one close game yet. I think this will change tonight.

I expect to see the Celtics get back to their physical ways, even with Kendrick Perkins sidelined. The Lakers need to counter this by playing a smart game. The bench needs to play as well as they did in Game 6. And, the most important thing, Kobe needs to play like the best basketball player in the world. If the Lakers do these things, we'll have that parade down Figueroa Street.