Blowing It On Bobblehead Night 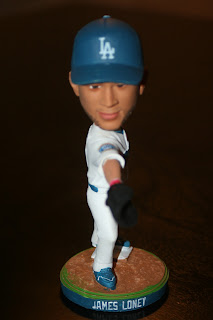 What a game. The offense came to life against Tim Lincecum. Andre Ethier hit a big first inning homerun. Clayton Kershaw pitched well and left tonight's game with a  5-4 lead. But in the end, the bullpen blew that lead. Broxton's got some issues that need to be worked out. Watching him pitch is maddening. What can be said about George Sherrill? I can't see how the Dodgers can continue to hang on to him. He's lost it.
On his bobblehead night, James Loney went 0 for 3 with a walk. He also helped Jonathan Broxton exit the game early. After making one trip to the mound to talk to Brox, fill-in manager Don Mattingly was called back to the mound by Loney, and that was considered to be a second trip. By rule, a manager can only make one trip to the mound to talk to the pitcher. A second trip means the pitcher must leave the game. And that was when Mattingly brought in Sherrill. I knew what was coming at that point. Sherrill gave up the lead and the Giants won 7-5.
The Dodgers have lost six games in a row  and are now 6 games behind the first place Padres. Oh yeah, and Manny's been placed on the disabled list AGAIN! Things are pretty bad in Dodgertown right now.


Another bobblehead was given away tonight. James Loney's bobblehead was the third of four bobbleheads this year. Presented by Carls Jr, this bobble was made by P Squared Promos and given to the first 50,000 fans in attendance. 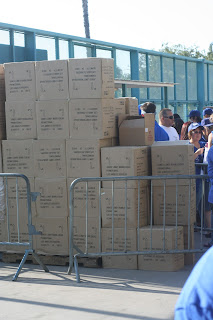 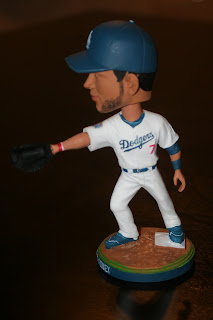 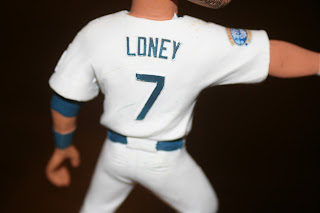 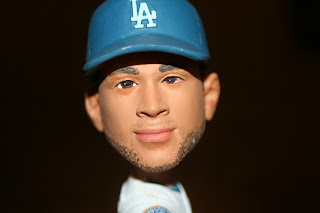 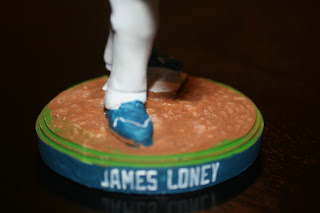 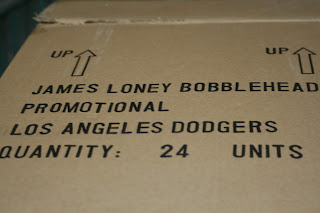 I went to the game with my son Kevin tonight. It was our first trip to the Ravine together this year. We had a great time. It would have been better with a Dodger win.