Finally, a win. It's been eight days since the All-Star Game was played, and the Dodgers finally get a second-half victory, beating the Giants 2-0. One night after playing in one of the worst games all year, the Dodgers turn around and play one of their best games of the year. 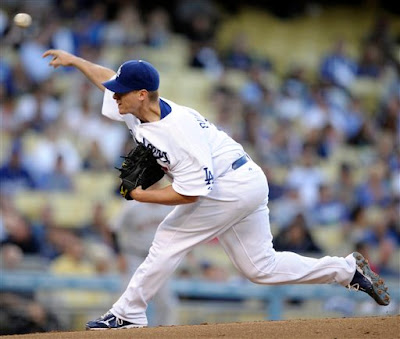 Tonight's starter, Chad Billingsley pitched his first complete game of the season, giving up only five hits. He threw 125 pitches, striking out three Giants while only walking two. An impressive outing for Bills at a time when the bullpen really needs some rest.

Casey Blake drove in both Dodger runs, homering  in the second inning and knocking in a huge insurance run in the eighth.

We found out today that manager Joe Torre, bench coach Bob Schaefer and Clayton Kershaw will be suspended for their actions in yesterday's game. Joe Torre served his suspension tonight, so Don Mattingly served as acting manager one night after his debacle at the pitchers mound.

It was a very frustrating time for Dodger fans this last week. Now that they have this victory under their belts, I'm hoping the Dodgers will get back to their winning ways.
Share |
Posted by Dodgerbobble at 10:29 PM