The Dodgers pulled off a nice victory last night. This last week has been stressful for Dodger fans, but the boys in blue finally got their first win in the second half of the season. I slept much better last night than I did the night before.

Let's see what's going on with the Dodgers. 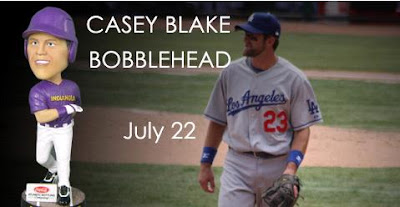 Casey Blake Bobblehead Giveaway. Dodger third baseman Casey Blake is getting another bobblehead.  It's not from the Dodgers, but the Iowa Cubs, AAA affiliate of the Chicago Cubs. The first 1,500 fans at tonight's Iowa Cubs game will receive a free bobblehead of Iowa-native and Indianola High School alum Casey Blake. I posted pictures of this bobblehead earlier this year.

Joe Torre is uncertain of his future in Los Angeles. I hope he doesn't come back to LA next year. He can go to Chicago for all I care.

Dodgers call up a reliever, option a catcher. The Dodger have called up Jack Taschner from Triple-A Albuquerque.  To make room for him on the roster, they've optioned back-up catcher AJ Ellis to AAA. They may also call up Jay Gibbons, who is currently batting .327 with 17 homeruns and 70 RBI down in Albuquerque.