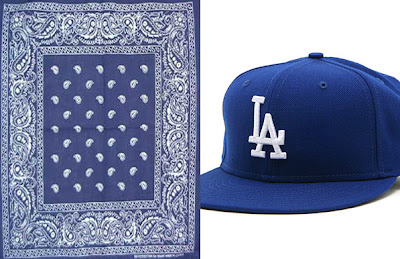 There’s an interesting stealth sports merchandise trend going on here in Los
Angeles that, until now, has been under the radar for most folks outside of
SoCal.

For decades, Raiders gear has been the team of choice
in L.A. gang culture, but in the past 2-3 years, local sports team affiliation
has changed dramatically for those involved in that type of organized criminal
activity.

The Dodgers have now clearly gained most-favored status among
Los Angeles gang members.
The Dodgers were no.1 on list called “Rep Yo
Set: The 10 Most Gang-Affiliated Hats in Sports,”which is on
the website, Complex.com. Dodger lids are ranked #1, with the Raiders in
at #3.

The Dodgers are finally no.1 at something, it just shouldn't be this.
Share |
Posted by Dodgerbobble at 3:17 PM