How about that Dodger offense?  It's non-existent right now. Last night, the Dodgers were only able to come up with ONE run on FOUR hits. It's sad. The offense is averaging just 2.15 runs a game since the All-Star break, so the Dodger pitching needs to be damn near perfect in order to get a win. Kuroda wasn't bad last night, giving up 3 runs in six innings. He struck out five, while only giving up four hits and two walks. The bullpen had another bad night. Jeff Weaver, Travis Schlichting and Jack Taschner gave up three more runs, which pretty much sealed the victory for San Diego. George Sherrill, surprisingly, was able to get the two batters he faced out, lowering his ERA to 6.94.

The Dodgers trade for Scott Podsednik, which means they also get his wife, Lisa Dergan. Check out her website here.

Remember those pictures of Matt Kemp in a red Michael Jackson jacket? They were for a poster being given away on August 6 at Dodger Stadium. 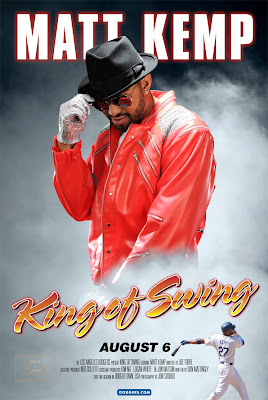