Pods To L.A. For Pimentel And May 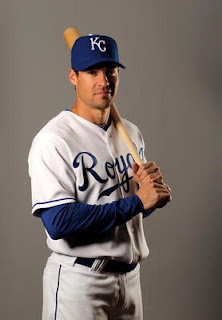 Ned Colletti made a move today, acquiring outfielder Scott Podsednik from the Kansas City Royals for catching prospect Lucas May and low Class A pitcher Elisaul Pimentel. The Dodgers will pay the estimated $650,000 left in Podsednik's salary for the year. There is a club option next year at $2 million, with a $100,000 buyout.

Pods was batting .310 with five homeruns and 44 RBI for Kansas City. He also had 30 steals in 42 attempts for KC this year. He can play all three outfield positions.

Lucas May was hitting .296 with 11 home runs and 45 RBIs at AAA Albuquerque. He will be assigned to Triple-A Omaha.

The 22-year-old Pimentel was 9-3 with a 3.49 ERA in 16 starts for the Class A Great Lakes Loons. He will report to Class A Burlington.

What do I think of this trade? Eh. The Dodgers did need a bat off the bench, so it's not that bad. I am concerned about the Dodgers depth at catcher. With May gone, the Dodgers don't have any top catching prospects in the high minors besides AJ Ellis. There had been some Russell Martin trade rumors swirling around, but they never really had legs. Obviously, the Dodgers are in no position to move Martin now. That Casey Blake for Carlos Santana trade looks even worse now.

Ned will concentrate on pitching until the trade deadline. From DodgertownUSA: