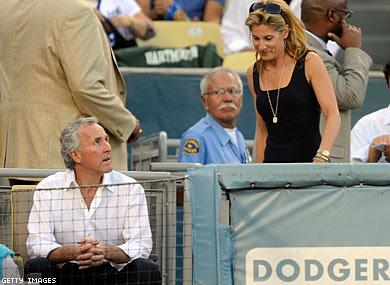 The Dodgers could be ordered sold by judge presiding over case. As Frank and Jamie McCourt continue to fight over everything from unpaid bills to lawyers fees to property taxes, L.A. Superior Court Commissioner Scott Gordon says one resolution would be to sell 'the asset which is being fought over.'

I really hope that's what happens. Realistically, the McCourt's will be ordered to sell some of their homes rather than the Dodgers.

Tony Jackson at ESPNLosAngeles.com grades the Dodgers first half of the season. His overall grade of the Dodgers is a B. Tony also grades each position player, the bench players, starting pitching, the bullpen and Joe Torre. Tony also feels the Dodgers are one trade away from winning the NL West. I think the B is a fair grade. The Dodgers could have played much better than they did. Let's see if the Dodgers actually make a move before the deadline.

The Dodgers put George Sherrill on waivers. According to Tony Jackson, Dodger reliever George Sherrill, who has had an atrocious first half of the season, has been put on waivers. In 34 appearances Sherrill has a 7.32 era. It's highly doubtful he'll be picked up, but if he is, the Dodgers will lose him to that team. If he clears waiver, he'll have the option of accepting an outright assignment to the minors, or become a free agent.


I cringe every time Sherrill is brought into a game. It makes me sick to think uncle Ned traded Josh Bell to get this guy.


This special ticket promotion is available for every remaining home game, based on availability, and comes at the peak of summer as the pennant race heats up at Dodger Stadium.

A complete list of ticket options and pricing can be found by visiting dodgers.com/tickets, and full details on the Dodgers' $5 ticket promotion is at dodgers.com/specials.
Share |
Posted by Dodgerbobble at 9:26 PM