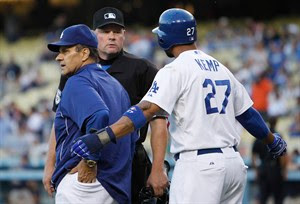 Matt Kemp had an amazing night, going five for 5, and the Dodgers still lose.  Kemp also was part a costly baserunning mistake in the first inning. They are now nine games back of the first place Padres. This season is slowly going down the drain.

The Dodgers held a closed door meeting before today's game. Maybe it helped a bit, as the slumping offense scored five runs. Too bad the pitching staff gave up TEN runs.

The Dodgers took down the Mannywood sign in left field. It's been replaced by John Hancock insurance sign. A team spokesman said the ballclub “sold the wall space.”

Vin Scully will call thirty-six more Dodger games this season. Could they be his last? Jon Weisman gives us his thoughts on Vinny. 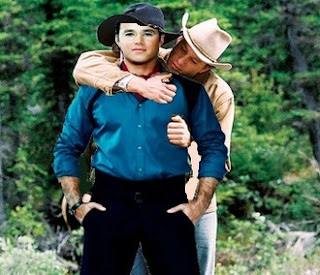 Do you miss Blake DeWitt? Well, then follow him to Chicago. Being a Cubs fan isn't easy.
Share |
Posted by Dodgerbobble at 11:49 PM