I want to thank @dodgertownusa for the tickets to tonight's Dodger game. My wife and I, along with many other winners of today's #TwitterTuesday contest, were given field level tickets and took part in the making of a Dodger commercial. It was a a lot of fun. 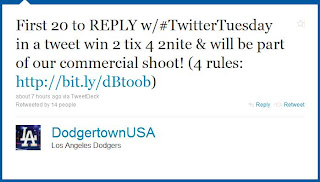 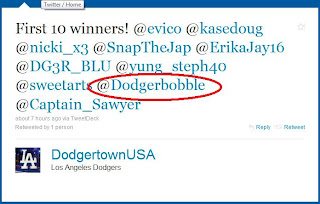 Plus, the Dodgers won, ending a six-game losing streak. Ted Lilly, who was just acquired from the Cubs on Saturday, pitched seven innings and retired 20 consecutive Padres in the Dodgers 2-1 victory. His only blemish was a first inning homerun given up to third baseman Miguel Tejada. 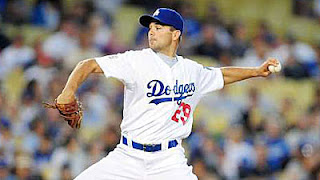 The Dodger offense was quiet again, scoring only two runs. Those 2 runs came in the second inning when Russell Martin hit his 13th double of the season, knocking in Matt Kemp and Casey Blake. After that 2nd inning, the offense wasn't heard from again. The Dodger pitching needs to be practically perfect right now. Hong Chih Kuo pitched a scoreless eighth inning. Broxton came into the game in the ninth and earned his 20th save.

We had fun at the game. I'm not the type to heckle the opposing teams players, but tonight I participated in the taunting of Padres right fielder Ryan Ludwick. It wasn't anything nasty, just some Lud-Wick chanting. Good times. 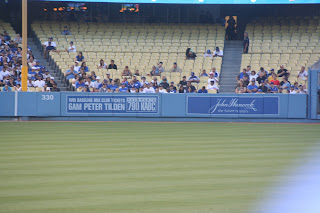 I also noticed the missing Mannywood sign in left field. That gave me a strange feeling, like Manny might not be back in Dodger blue again. We learned today that he probably wouldn't be ready to start a minor league rehabilitation for another week. The offense really does need him.

Anyway, thanks again to the Dodgers. I hope to see that finished commercial soon. 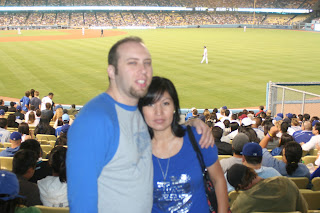