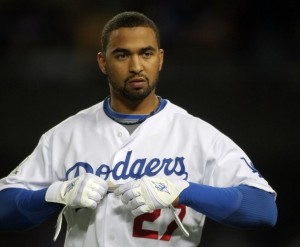 The Matt Kemp drama continues. In a Bill Plaschke article on Thursday, we heard from Matt Kemp's agent, former Dodger Dave Stewart. "It's almost like it's open season on Matt, and it's not right," Stewart said in a phone interview. "It's a bunch of back-seat crap." Stewart feels his client has been treated unfairly by the Dodgers, particularly by coaches Bob Schaefer and Larry Bowa, both of whom have been critical of Kemp this year.

Then in a Steve Dilbeck article, we find out  both coaches talked to Stewart late Thursday night or early Friday morning. "We had a good talk," Schaefer told reporters in Atlanta. "I’ve got a job to do. My job is to make players better. It’s up to the player to make himself better with our guidance."

I don't know what's gonna happen with Matt Kemp and the Dodgers. He is one of the most talented players in the game. By Matt Kemp standards, 2010 has been a down year though. There is obviously a lot of tension between the coaching staff and Kemp.

Ned Colletti says Kemp isn't going anywhere. So how can things get better between the two parties? Kemp needs to make changes. The coaching staff needs to help him become a better baseball player. That's all they are there to do. They can't change Kemp as a person.
Share |
Posted by Dodgerbobble at 9:27 AM