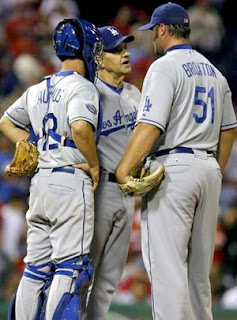 Yes, the Dodgers' 2010 season is over. I think we've known this for a few weeks now. Last night's bullpen debacle was just another reminder of how crappy things really are in Dodgertown.

I woke up yesterday eager to see Clayton Kershaw and the Dodgers play. After getting completely manhandled by Roy Oswalt the night before, I also couldn't wait to see Joe Blanton. I also hoped for Matt Kemp's return to the line-up. Well, Matt Kemp made his return, going 3 for five with a homerun and 4 RBI and the offense jumped all over Joe Blanton. Kershaw was amazing, going 6 2/3 and giving up only two runs. Great. The Dodgers were up 9-2 in the eighth. And then the shit just hit the fan.

Ronald Belisario and Jonathan Broxton. Two names Dodger fans are hating right now. Between the two of them, they faced nine Phillies and gave up EIGHT runs. Belisario was just god-awful giving up four runs in the eighth.

Broxton was just as bad. He hit the first batter he faced, then walked the next two. Then Casey Blake did his best Bill Buckner impression. With the bases loaded, Ben Francisco hit a sure double play ball to Blake, which went right through his legs, allowing two runs. This didn't help Broxton, as the DP could have made the difference in the game.

Carlos Ruiz then came up and and crushed a hanging slider, scoring the the tying and winning runs.  Brox faced five batters and retired none of them.

Broxton's has had a rough two month stretch. Since June 27, he has an era of 7.94. Joe Torre wouldn't say whether Jonathan Broxton will continue to be his closer.

"Let the smoke clear before you get me to say something I haven't thought about. He's a big boy, he'll be all right. Long-term, I'm not worried about him."

I think it would be a huge blow to Broxton's development to take him out of the closer's role now. In a season that is already lost, let him figure out his problems on the field. Yes, Hong-Chih Kuo has been amazing. Kenley Jansen hasn't been too bad either. But we all know about Kuo's elbow and how often he should be used. Jansen is still too raw. The Dodgers are out of the playoff race in 2010, so why make a change now? If this continues with Broxton in 2011 though, I'm all for change.
Share |
Posted by Dodgerbobble at 7:07 AM