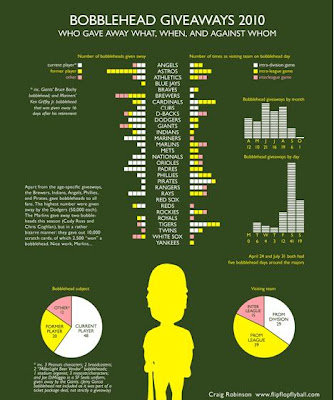 Flip Flop Flyball, the site that gives us all the baseball infographics, has analyzed the major league bobblehead giveaways of 2010. They breakdown who gave away what, when, and against whom. The chart shows which bobbleheads were current players, former players or someone other than a baseball player.

So, which teams gave away the most bobbleheads in 2010?  The Astros were first with NINE. Yes, nine bobblehead giveaways in Houston this year. Two current players and seven former players, which probably says something about the current Astros. Next on the list were the Milwaukee Brewers, with seven bobble giveaways.

Which teams gave away the least? The Braves, Rockies, Red Sox and Yankees gave away NO bobbleheads this year. Giving away a bobblehead is great way to get fans to the ballpark. Teams like the Yankees and Red Sox don't really need do anything like that to get people to show up. What's up with the Braves and Rox? The Blue Jays, Mets, Pirates, Twins and Rangers all had one bobblehead giveaway this year.

It seems like bobblehead are still a very popular giveaway. 16 of the 30 teams gave away at least three bobbleheads, with another five teams giving away two in 2010. I think it's safe to say bobbleheads will be just as popular in 2011.
Share |
Posted by Dodgerbobble at 4:03 PM