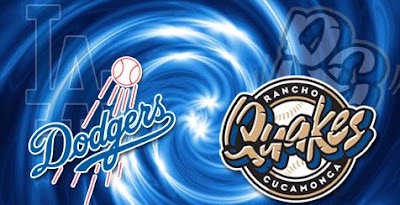 From the Dodgers' Press Release:

The Los Angeles Dodgers and Rancho Cucamonga Quakes today announced the signing of a two-year player development contract that will make the Quakes the Dodgers' affiliate in the Single-A California League for the 2011 and 2012 seasons.

The two clubs will hold a public celebration featuring Hall of Fame Manager Tommy Lasorda and other Dodger personalities from 11:30 a.m. to 1:30 p.m. one week from today, Tuesday, October 5, at the Epicenter in Rancho Cucamonga.

"We feel like the move to Rancho not only brings our High A partner closer to Dodger Stadium, but is a strong fit for our organizational goals," said Dodger Assistant General Manager De Jon Watson. "We're excited to partner with Brett Sports and look forward to a long-lasting relationship."

The 2011 season will be the Quakes' 19th year playing in Rancho Cucamonga, which is located just 46 miles east of Dodger Stadium. Rancho Cucamonga has made the playoffs in each of the last two seasons and won its only California League title in 1994. The franchise is owned by Brett Sports, which is led by Hall of Famer George Brett and his brothers Bobby and John, and had previously been affiliated with the Angels from 2001-2010.

"The Dodgers are one of the most prestigious teams in all of sports and we are excited to begin our partnership with them in Rancho Cucamonga," said Quakes Managing Partner Bobby Brett.

If it's a little closer, maybe I'll get to one or two Quakes games next year. I never attended a game in the IE, but I did get to see the 66er's play in Lancaster earlier this year against the JetHawks.