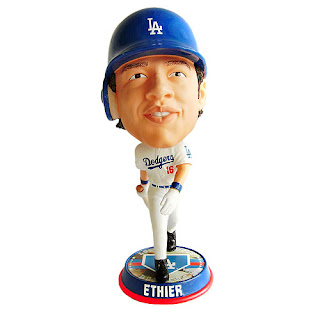 Anyone like the Forever Collectibles bobbleheads? Right now they're buy one get one free at the MLB.com Shop. The deal is for all 30 teams. The Dodgers have three available, Matt Kemp, Andre Ethier and Manny Ramirez. Yes, there are still Manny Ramirez Dodger bobbleheads available. 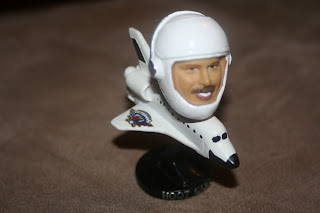 Back in August, I attended my first minor league baseball game. I went to see the Lancaster JetHawks play the Inland Empire 66ers. The JetHawks gave away bobbleheads of former astronaut Hoot Gibson. Well, that bobblehead was voted minor league baseball's best giveaway in 2010, narrowly beating out the Ike Davis bobblelegs given away by the Brooklyn Cyclones.

Looking at the picture of the Hoot Gibson bobble on MiLB.com, I noticed they used MY bobblehead. Cool. C'mon MiLB, can I get a photo credit please! 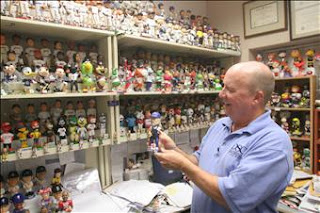 Ken Ellinger, a Dalton State political science professor, has a collection of 880 bobbleheads in his 90-square-foot office. Ellinger began collecting primarily sports and political figures about six years ago and has never paid more than $20. Hopefully my collection will look like that one day. Click here to watch video of his collection. 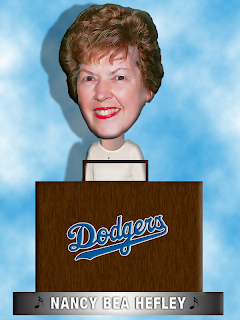 And finally, with the Dodgers announcing that they would be giving away SIX bobbleheads in 2011, everyone is guessing which players, coaches or legends would get one of the six honors. I think long-time Dodgers organist Nancy Bea Hefley deserves one. Mike over at the LFP.com gives us an idea of what it would look like.
Share |
Posted by Dodgerbobble at 4:48 AM