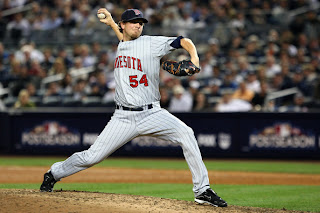 The Dodgers have signed pitcher Matt Guerrier to a three-year deal. The former Twins reliever appeared in 74 games last year, going 5-7 with a 3.17 era.

Signing Guerrier will not cost the Dodgers a draft pick, as the Twins declined to offer him arbitration. There are no details on the contract yet other than it's for three years.

Once again, I'm curious as to how much Ned paid. I wouldn't be surprised if he overpaid, especially considering the Red Sox showed a lot of interest in him.

The Dodgers bullpen was a mess in 2010, with Joe Torre using 24 different pitchers in relief. This could give the Dodgers some stability. Guerrier, Kenley Jansen, Hong Chih Kuo and Broxton give the Dodgers a solid four in the late innings.

UPDATE:
Ned strikes again. I guess I shouldn't be surprised that he overpaid for relief pitching. The deal is for three years/$12 million. Ugh.
Share |
Posted by Dodgerbobble at 8:26 AM