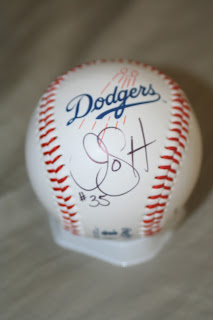 My mother, who works for Kaiser Permanente, told me about a former Dodger making an appearance at a company event. It was pitcher Jim Gott. Gott pitched for the Dodgers from 1990-1994. The event he  appeared at was Kaiser Permanente’s Rose Parade Family Day in Irwindale. Everyone in attendance was treated to a sneak preview of Kaiser's 2011 Rose Parade float, “Purrfectly Healthy". You could watch volunteers working on the floats and there were games and activities for the children. 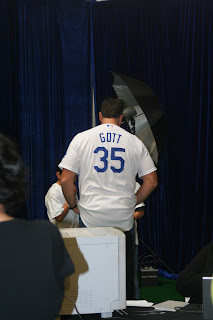 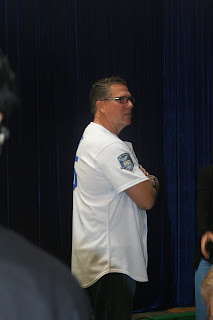 When I got there, I was the first person in line. Mr. Gott was ready to start taking pictures and to start signing. I handed him my baseball, but he only had a sharpie. So I went to go look for a pen. That's when a few other people jumped in front of me. I didn't mind, I was there to have a good time. 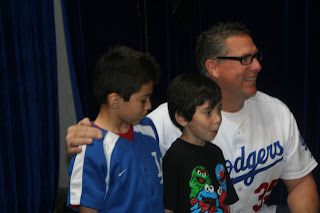 After those people got their autographs, my two sons and I stepped up to meet him. There was a professional photographer there taking pictures. It was very nice. She took a picture of us, then I handed her my camera, and she took a couple more pics for me. 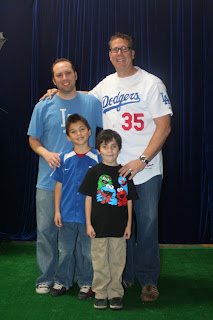 Gott then signed my baseball and a Dodger hat for me. He shook hands with me and my sons and chit chatted for a minute. He told me his father was on the Board of the Tournament of Roses and that he lived in Pasadena. I told him I was going to meet Steve Yeager next and he told me to say "hi" for him. 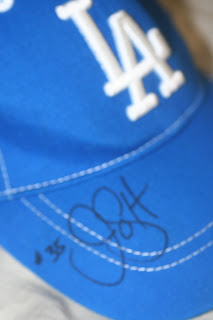 My kids and I had a great time today. Thanks to Jim Gott and Kaiser Permanente for everything.
Share |
Posted by Dodgerbobble at 4:12 PM