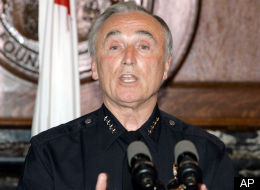 The Dodgers announced today that they have hired former Los Angeles Police Chief, and current Chairman of the global security firm Kroll, William J. Bratton. After last week's brutal attack on a Giants fan by two Dodger fans, the Dodgers have responded by hiring Bratton and his firm to beef up security in and around Dodger Stadium.


Earlier today, the Los Angeles Dodgers hired Kroll Chairman and former Los Angeles Police Chief William J. Bratton to assess policies and procedures related to security and fan services at Dodger Stadium, and to work with the Dodger organization to develop a best practices security blueprint that extends to both the stadium and the parking lots.
"Bill Bratton is widely credited with spearheading modern community policing in America," said Los Angeles Dodgers Owner Frank McCourt. "There is no one better to lead a top-to-bottom review of our current practices and make recommendations to be implemented now and into the future."

Bratton and his team at Kroll will begin consulting immediately.

"I am pleased to have the opportunity to return to Los Angeles to consult with the Dodger organization on the security posture at Dodger Stadium," said Bratton. "We will take a full and comprehensive look at security procedures and processes, and make recommendations based on our findings."

The Dodgers enjoy a longtime working partnership with the LAPD, and see Bratton and Kroll's role helping with internal procedures at the Dodgers.

"We are committed to ensuring that Dodger Stadium remains a family-friendly environment for all baseball fans," said McCourt.

I know there are no quick fixes. I know that Dodger security, the LAPD and Bratton and his group will not be able to watch every bit of Dodger Stadium or the parking lot all the time. Anything can happen anywhere. But this is the first step in making fans feel safer. I'm a Dodger fan, and I don't always feel safe at Dodger Stadium. That's sad. It's a place where families should go to have a good time, not to feel scared.

Is this something that has come too late? For Bryan Stow, the Giants fan who was beaten, yes. I feel sick whenever I think about what happened to him. I feel terrible for his family. They shouldn't have to go through this. This is a move the Dodgers needed to make, even if it came a week, a month, years too late. Better late than never.
Share |
Posted by Dodgerbobble at 9:00 PM