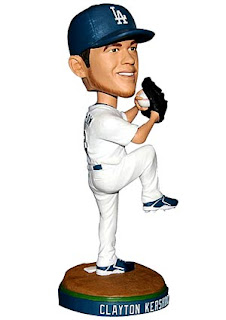 Alright, we're about one month into the baseball season, and now it's time start thinking about the upcoming bobbleheads. The first Dodger bobblehead giveaway, Clayton Kershaw, is now three weeks away. I'm starting to get excited. There's nothing better than going to Dodger Stadium and picking up another bobblehead for the collection.

For your collecting and/or reading pleasure, Bill Shaikin ranks an entirely subjective list of local bobblehead giveaways, ranked from most coveted to least coveted:

1. FERNANDOMANIA (Dodgers, July 26) He's Fernando. This is L.A. Plus, he actually did bob his head during his delivery.


6. KENDRYS MORALES (Angels, May 24) Half the bobbleheads have Morales hitting right-handed, half left-handed.

12. DON MATTINGLY (Dodgers, June 1) Would rank higher if he were hitting, not standing atop the dugout steps.


18. BUD BLACK (Padres, May 7) Padres' manager has as many home runs as his second baseman, shortstop and right fielder combined — zero.

Great list. I think Fernando will always be popular here in SoCal, but this is his THIRD Dodger bobblehead. I covet the Duke Snider and Kershaw a little bit more. So, Did Shaikin get this list right? Thoughts?
Share |
Posted by Dodgerbobble at 6:37 AM